The end of residency concert 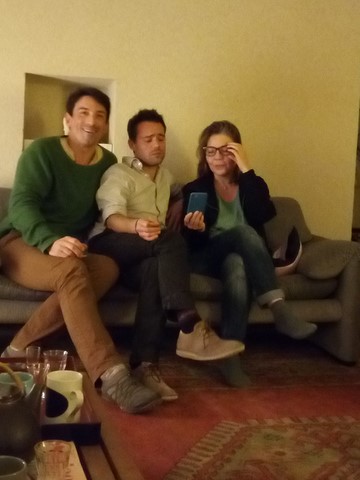 The residency is coming to an end. In fact, I should have already left this morning. I have extended my stay by 24 hours. I had that little leeway, so I took it. Especially since Sophie started directing a show in Auxerre, so we don’t see each other as much. And tonight, it will be fun. There will be Morgane the comedian of the show and her husband who are also neighbors. There will also be Alexandre and her husband who are not neighbours but whom I know. I played with Garden a few years ago in the shop of Alexander, the Cousin of Nepal. Still a very beautiful place, with lots of nice things coming from Nepal. I would rob everything! We went back with Sophie, I wanted to. And I robbed...modestly!

It’s New Year’s Eve after all. After all, the reconfiguration hangs in our noses, so you might as well let go now or never! On the menu: oysters, caviar (my first experience but I find it too salty for my taste!), champagne, Dahl of beluga lentils… An evening of high potential!
We move to the salon at a late hour for herbal tea and concert. I am feverish. I never really liked performing on a couch, not makeup, not styled, or even slightly drunk. When I was younger, I hated being told, “Go Geraldine, play us a little guitar thing or sing us a little song!” As much as the stage is a real exhilarating playground that meets the conditions, as much as making the musician of service, I do not know how to do well. But I am learning. Because I admire those who know how to do it with ease and without shame.
So I breathe and I do. I don’t know if I started with the crappy song or Johnny (you’ll notice I do the distingo well).
I roll out the crappy song. Martin’s laughing. I think this guy’s a good audience and I thank him because I like people laughing at my crappy song. I don’t have any recordings of that moment, and I wouldn’t have listened to it here. What happened in Avigny has to stay there. But if you ever run into me with a guitar, I allow you to ask me, "G, would you like to do the crappy song?" And I’ll do it. I promise.

In the meantime, here is the text just for you:
«A rotten song in Avigny
This is the instruction
A rotten song in Avigny
This is a sign!
Break the ceiling
Let’s join hands
Scalons quickly and well!
'Cause that’s enough...
enough with the black holes
Lack of friends, lack of hope
Sieves, bottoms of drawers
Des loirs
Of mirrors
Accessories…
Assholes!"
That’s it. Now you can unsubscribe if you feel like it.
However, I have placed in this text a new word learned by Sophie that I did not know and perhaps you did not know: SCALER. It’s to boost your business! Basically, to be bankable. After all this beauty, you come back to earth!!
I go on to “I promise you”, I think twice. I ask my listeners for the second to listen to it by closing their eyes, to make it a kind of lullaby-meditation. And it works because Sophie, against all odds, begins to find an interest in the song. Like what, never say never!
And as a good surprise never happens alone, Kevin, Alexander’s husband, until then rather discreet and measured is taken with a furious desire for French karaoke song. And here I am playing the role of the guitarist on duty, sailing between Brel, Brassens, Bécaud and all the B’s of the botin. We sing at the top of our lungs. It’s really New Year’s Eve until the end of the evening. And it was good to close this residence!

ps: if you want to find out what happened to the meditative Johnny song that has his music video, it’s here